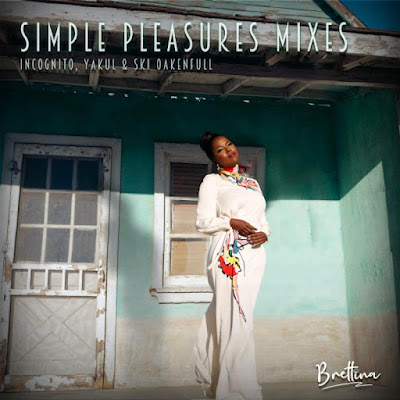 Bahamanian singer-songwriter Brettina has released her first single worldwide, a version of her track ‘Simple Pleasures’ with UK Jazz and Funk legend Incognito.

Brettina's worldwide debut single is already gaining great appreciation and it went straight into Jazz FM playlist in the UK.

A fan of Incognito for many years, Brettina was delighted to work with their leader Bluey who brings his trademark production to the track, using the whole band to create a classic horn-driven sound.

"When I was a student at the University of Washington in Seattle I discovered Incognito and their album ‘Vibes, Tribes and Scribes’ and it blew me away. To think further down the line I’d be working with them on one of my songs, and fusing my experience with these icons of UK Jazz right now is incredible." Says Brettina on having Bluey and Incognito produce the track.

The remixes of the luscious single show her versatility as an artist, and one who is soon to be in demand across the broad spectrum that is the current UK Jazz scene.

Born in the Bahamas, Brettina’s musicality was in some senses laid out for her – her mother introduced her to singing, and her uncle was in the hugely successful Bahamian group ‘ T-Connection’, who had hits on the Billboard Top 100 chart in the US in the 70s.

Brettina herself now resides between the US and the Bahamas, originally in Seattle and now in LA where she’s making waves on the current LA Jazz scene.