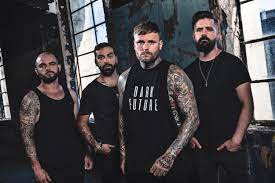 One of the UK’s breakout artists over the last 18 months, the Kris Barras Band have had a whirlwind rise which has seen them sell out a string of dates across their biggest headline tour to date in October 2019.

The rise? Well, from the release of 2018’s ‘The Divine And Dirty’, there have been the A-list radio singles, sold out shows across every headline tour they have taken on, and played to an audience of 3 million on BBC Radio 2 on two occasions, which is extraordinary for a new artist. Barras has toured Europe as the frontman with the legendary Billy Gibbons (ZZ Top) in Supersonic Blues Machine. Making history along the way, the Kris Barras Band are the only band to play 3 years in a row at Ramblin’ Man Fair, including 2019’s explosive main stage appearance.  They are also the only artist ever to have an unprecedented one in-one out performance at 2018’s Planet Rock Radio’s Rockstock Festival, where they returned in December 2019 to play the main stage.

The Devon-born Barras and his band have barely had the time to catch their breath, having a non-stop year that has seen them zig-zag the UK and Europe supporting the likes of Bon Jovi, Kentucky arena-rockers Black Stone Cherry, Beth Hart, The Magpie Salute (Rich Robinson of The Black Crowes), Joanne Shaw Taylor, John Mayall & The Bluesbreakers, Walter Trout and Jonny Lang.

They capped this off with a flood of critical praise and an ever-growing fervent fan base which contributes to them winning Planet Rock Radio’s prestigious 2019 ‘Best New Band’ Award. The rise has continued to propel the band further as 2019’s follow-up album ‘Light It Up’ crashed in the UK album charts at #49 announcing the band to a wider stage and with it, followed the flood of critical praise, sold out shows and highlights them as one of the most exciting artists in the UK at the moment. Kris also moonlight’s as a radio DJ, having hosted a regular slot on Planet Rock and currently presenting a show on Feedback Radio.