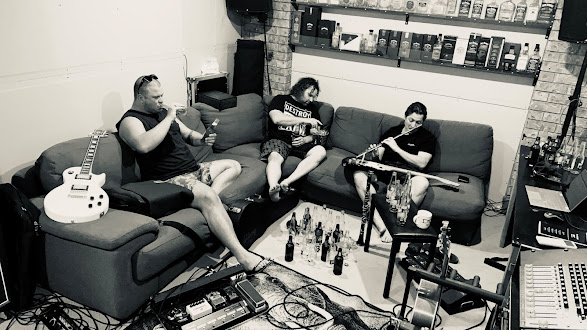 NoseBeers in a nutshell = 3 likeminded offensive musicians no one wants, playing rock music no one wants to hear whilst working under a silly band name no one gives a f**k about. They take nothing seriously, aren’t looking to be the next biggest anything, aren’t anyone’s cup of tea and that’s how they like it!

Featuring Simmo (lead vocals), Tommo (guitars, vocals) and Tobo (guitars, vocals, keys, drums, producer); these guys have been playing in bands for many years in the Australian music scene with a lot of the same people. As the years faded, so did the band members; dwindling down to only 3. Through survival of the fittest, NoseBeers was formed.

The boys have made it quite clear through their music and attitude that they are done trying to please the music industry and the people within. The time has come to write only what comes natural to them and to ignore outside influences and factors. This has resulted in a truly personalised hard rock sound combining old school influences with a modern rock approach. This approach is further complimented by the recording, mixing and mastering all done by band member Toby Thompson, keeping NoseBeers a holistic inhouse operation.

The underlying truth that can’t be stressed enough is: if you like them or don’t like them… they don’t care… at all… They will do what they do regardless of anyone’s opinion. Simon Vermeulen (lead vocals) stated that “It doesn’t matter how many people like your music because there are always more people out there that don’t”. A humble yet honest remark.

So where can you get your hands on a NoseBeers album? Well… you can’t! NoseBeers does not release albums or hard copies! They only release digital singles which you can found on all major streaming and downloading platforms. When asked why this is, Simon Vermeulen (lead vocals) commented, “how many times have you paid for an album and only liked a couple of songs”? “This way, you only have to buy the ones you like”; a rationale that’s teeming with common sense.

With no photos or videos, no live appearances announced and very little information available, you just never know what to expect from a band of this nature, or what’s waiting around the corner. One thing is for sure though… Watch this space!