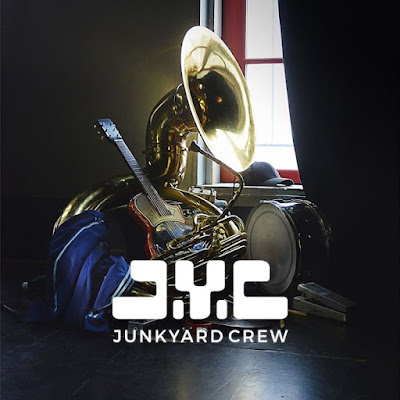 Life Slides. The expression can be interpreted in a number of ways: a child’s sliding board, a sliding life, snapshots – and, of course, the slide guitar heard throughout the album.

Life tales tell us about the uncertainty of our world as seen from the narrator's perspective – but not only. Boney Spree, for instance, is a woman's thoughts about a one-night stand that turned into a nightmare for her reputation.

Of course, Manouche Fournier also shares his own tribulations. With its heavy beat, Going Down tells the story of his toxic friendship with a certain Mr. M. who turned out to be a con man. Still relying on his bottleneck & rap style, Manouche lets us hear a dialogue between two friends in Troublations – with one trying to convince the other that life is worth living no matter what. On the sunnier side, Piti Filé Gumbo recalls with glowing nostalgia his encounter with a Louisiana Creole woman. In French, naturally.

That region of the world is clearly a powerful source of inspiration for Junkyard Crew, if only through the instrumentation: the sousaphone (the iconic New Orleans tuba), the drum set that was invented there, and, of course, the resonator guitar popularized by so many Blues musicians -- in a part of the Deep South where French still resonates in Creole and Cajun communities...

The horn arrangements were written by the band’s co-founder, trombonist and tubist Jean Crozat (who also co-wrote some of the music). His horns range from the reflections of a tortured soul – as in the spiritual Death Comes Creeping – to the luminous brassy sounds of the powerful Electro-Blues number, That Grin of Yours.

The final touch comes from Reunion Island via the Creole percussionist and vocalist David Doris. His hands and voice give life to La Facture, where France is reminded of its claim to be the land of the Enlightenment – while mishandling a refugee crisis it helped create. We also hear him on Whatcha Gonna Do – Reloaded, where climate change shines through a blend of Duke Ellington and Blaxploitation grooves.

That's How I Wish wraps the whole thing up, but with underlying tension. In this slow number, a self-righteous attempt to right some wrongs fails in the face of powerful adversity. The end might just sum up the whole album – the struggle continues, but it's best to choose your battles...