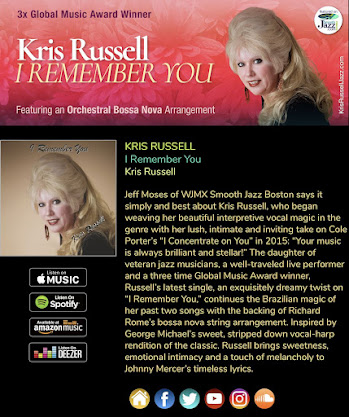 Kris Russell is a 3 times Global Music award winner and has charted on the USA Smooth Jazz charts. She released 3 singles before releasing "I Remember You".

Her previous single "Batucada Surgiu" (by composer Marcos Valle) charted on the UK Indie Alliance chart in June 2019. Her second single "Down in Brazil "( by Michael Franks) was on Billboards #6 most added chart in 2017. "I Concentrate on You" by Cole Porter, was on the TM Century Gold Disc.
KrisRusselljazz.com
at January 23, 2023
Email ThisBlogThis!Share to TwitterShare to FacebookShare to Pinterest
Labels: easy listening, jazz