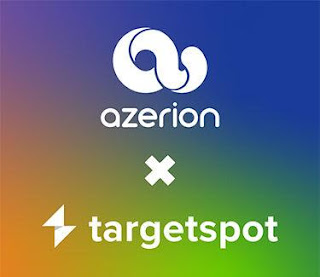 Amsterdam-based digital entertainment and media platform Azerion has closed on its purchase of digital audio advertising company Targetspot from Radionomy. The cash and stock deal worth $27.3 million was first announced in November. The official closing came on Dec. 23, following the approval of Targetspot’s shareholders at a Dec. 9 meeting. The Brussels-based Targetspot, which represented 92% of Radionomy’s business, generated revenue of €13.4 million in the first half of 2022. Under the deal, Targetspot’s programmatic ad sales technology will be folded into Azerion’s existing advertising offerings. "Our Targetspot division and Azerion complement each other perfectly,” Alexandre Saboundjian, President and founder of Targetspot said when the deal was announced. “We bring a proprietary digital audio technology that was missing from Azerion's current ad tech platform, while Targetspot will benefit from Azerion's commercial strength, present in 24 countries, and its close ties with over 575 publishers and 400,000 advertisers.” Targetspot says it has more than three billion monthly impressions in over 30 markets worldwide, including the U.S, and works with more than 15,000 audio channels worldwide. Targetspot sells digital audio advertising across streaming music, podcast, audio books, digital video, and online video games. It had $13.8 million in revenue during the first half of 2022, which was 12.4% higher than a year earlier. Azerion says the acquisition “further solidifies” its entry into the U.S. market. It will also give Azerion a more complete suite of advertising products. Under the terms of the deal, Radionomy shareholders will receive a cash payment in three separate tranches – at closing, another in April 2023, followed by a third in January 2024. They will also receive 2,782,644 Azerion shares. There will also be the potential for another $3 million worth of stock paid to Targetspot shareholders if certain earn-out conditions are met. Azerion’s stock is listed on Euronext Amsterdam exchange.
at January 09, 2023
Email ThisBlogThis!Share to TwitterShare to FacebookShare to Pinterest
Labels: advertising