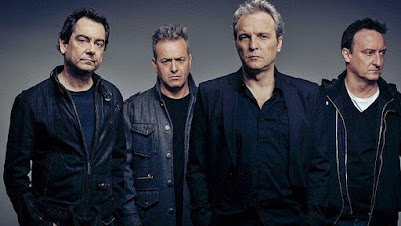 Do you love Spanish rock bands? Read on to learn about 13 huge bands in the Spanish music industry. It’s a wonderful genre to enjoy while practicing your Spanish.

Spanish rock bands with female singers are somewhat rare, but there are many great solo female artists in Spanish rock.

Hombres G is a Spanish rock band named after the American movie G-Men who made their debut at Madrid’s festival, Rockola, in the 80s. They signed to an independent label called Twins and their song Devuélveme A Mi Chica was the smash hit that took them to stardom.

In 1986, La Cegaste was released and also became a huge hit. Because of their songwriting skills and catchy lyrics, Hombres G has been recognized as one of the best rock bands in Latin America and Spain.

The band consists of Javi Molina on the drums, David Summers on the bass and vocals, and Rafael Gutierrez and Dani Mezquita on guitar. Hombres G stood out in large part thanks to the captivating talent of their drummer.

Their unique sound is evident in their catchy songs, such as:

Enanitos Verdes is another Argentinian band that came out in the 1980s. This legendary Spanish rock band gained popularity with their second album Contrarreloj.

Their single La muralla verde (The Green Wall) was a smash hit throughout Latin America and Spain. People love to sing along to their incredible hits. Lamento boliviano (Bolivian Sorrow) is another of this band’s greatest Spanish rock songs.

Café Tacvba (or Café Tacuba) is one of the most famous Mexican rock bands of all time. Their rebellious and unique sound fits into the alternative and pop rock genre.

The group began in 1989. Their best songs include Eres (You Are), La Ingrata (The Ingrate), and El Aparato (The Apparatus). International music buffs compare their sound to The Cure.

The band’s sound uses traditional Mexican music styles, reimagined, in their songs. They honor their country in the music that they write. Listening to Café Tacuba is a splendid way to learn more about the Mexican culture.

Maná is another famous Spanish rock band from Mexico. Although they started in the 1970s, Maná had to wait almost for 11 years to gain popularity.

Finally, in the 90s they became the phenomenon that they are today. Their album, Dónde jugarán los niños, (Where Will The Kids Play) took them to stardom.

Some of their best songs are:

Ever since, critics and fans recognize Maná as one of the most influential Spanish rock bands of all time.

Soda Stereo is an amazing Argentinian Spanish rock band. Their music is legendary due to their poetic lyrics and catchy melodies. Many say that their approach to music has changed the genre for the better.

Their lead singer, Gustavo Cerati, wrote many of the songs. Soda Stereo reached the height of their popularity in the 80s.

Two of their most famous songs are:

Molotov is a rebel Spanish rock band that mixes rap, heavy rock, and pop. Many of their lyrics are about doing whatever you want, whenever you want.

Molotov is popular with younger audiences. They came out in the 90s and continue to impact the Spanish rock genre today.

People compare them to Rage Against the Machine and the Beastie Boys. If you’re into punk rock, this is the Spanish rock band for you.

Carlos Santana is one of the most famous guitarists in the world. Rolling Stone Magazine ranks him as one of the most influential artists of all time. Santana came out in the 60s and continues to play with both English and Spanish rock bands.

Santanta has 13 Grammys so far, and he’s played multiple world tours. This 70-year-old rocker continues to play his guitar and inspire his multitude of fans.

Aterciopelados is a unique Spanish rock band from Colombia. They use traditional Colombian sounds mixed with rock and roll. The lead singer is a woman, and their crossover style has gained them world recognition.

Many say that their album El dorado (The Golden) is one of the best Spanish rock albums of all time. Florecita rockera (Rockin Little Flower) is an amazing pop rock song that’s super fun to dance to.

Zoé is one of the most unique Mexican Spanish rock bands out there. This grunge band started in 1994.

Leon Larrengui, their lead vocalist, created a one-of-a-kind lineup. Since the 90s, this Mexican band has found its own sound. Two of their most popular songs are Paula and Nada (Nothing).

Caifanes is a Spanish rock band from the 80s. Led by Saul Hernandez, they’re one of the most respected Spanish rock bands in Mexico. They blend British new wave, Latin beats, and progressive rock.

Fans love them for their use of music to make social and political commentaries. Some of their most recognized songs are Afuera (Outside) and Viento (Wind).

at January 08, 2022
Email ThisBlogThis!Share to TwitterShare to FacebookShare to Pinterest